How you can predict advertising success

A huge challenge of online advertising is getting people not just to notice your ad, but really engage with it and experience it. Purchased ad space does not mean people will see it, and it is hard to know what is truly seen and what is completely lost on the internet. Using the most advanced developments in eye tracking technology, Sticky lets brands and agencies track and evaluate visual attention data to determine what ad formats, placements, and creatives are not just viewable, but truly capture attention and increase consumer engagement.

Viewability does not equal noticeability

Viewability has evolved to become a key metric in determining the effectiveness of an ad. According to most, an ad is considered viewable if 50% of its pixels are in view on the screen for at least 1 second. This definition may, of course, vary depending on the format of the ad.

But does Viewability guarantee Noticeability? Does Viewability ensure that consumers actually see it and engage? Studies show that one-third of ads achieve a gaze time (time spent looking at the ad) of less than a second, while only 42% are looked at for at least 1 second. That means that it may go completely unnoticed by over a quarter of the population.

You would think if an ad is viewable then it is seen, but that is not the case. Just because an ad can be seen, does not mean it will be seen by consumers. Content, design, and placement will play a role as well. Look at the image below; it demonstrates how a 100% viewable ad is only seen by 6% of visitors to this website. 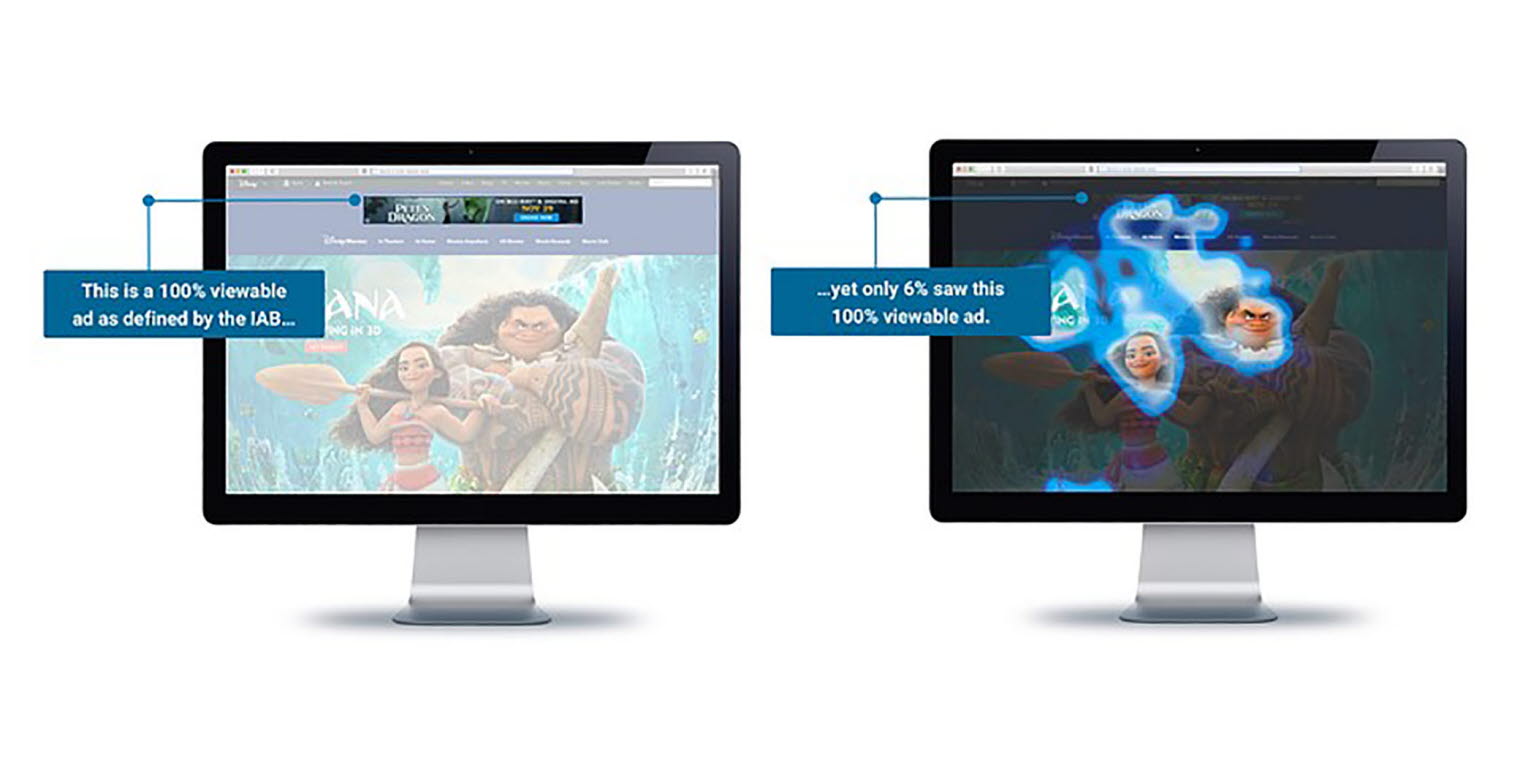 Yes, an ad needs to be viewable to be seen, but to ensure actual consumer engagement, the focus should be on using tracking methods that can measure what is actually seen by consumers and use this attention metric to increase discoverability and length of attention. Sticky’s online eye tracking platform does just this, measuring what is seen by consumers, what order it was seen and for how long it held attention to ultimately optimize ad engagement.

Engagement can cost you recognition

We want to drive ad engagement, but could ad imagery be too engaging? Yes! Imagery that is too effective in holding consumer attention can kill brand recognition. Why is that? Well, if the image is grabbing all of the attention, consumers will spend all of the time looking at it, causing them to miss key messaging or branding elsewhere on the ad. As can be seen in the image below, when branding is placed in the corner of an ad, especially the bottom right corner, it is completely missed. 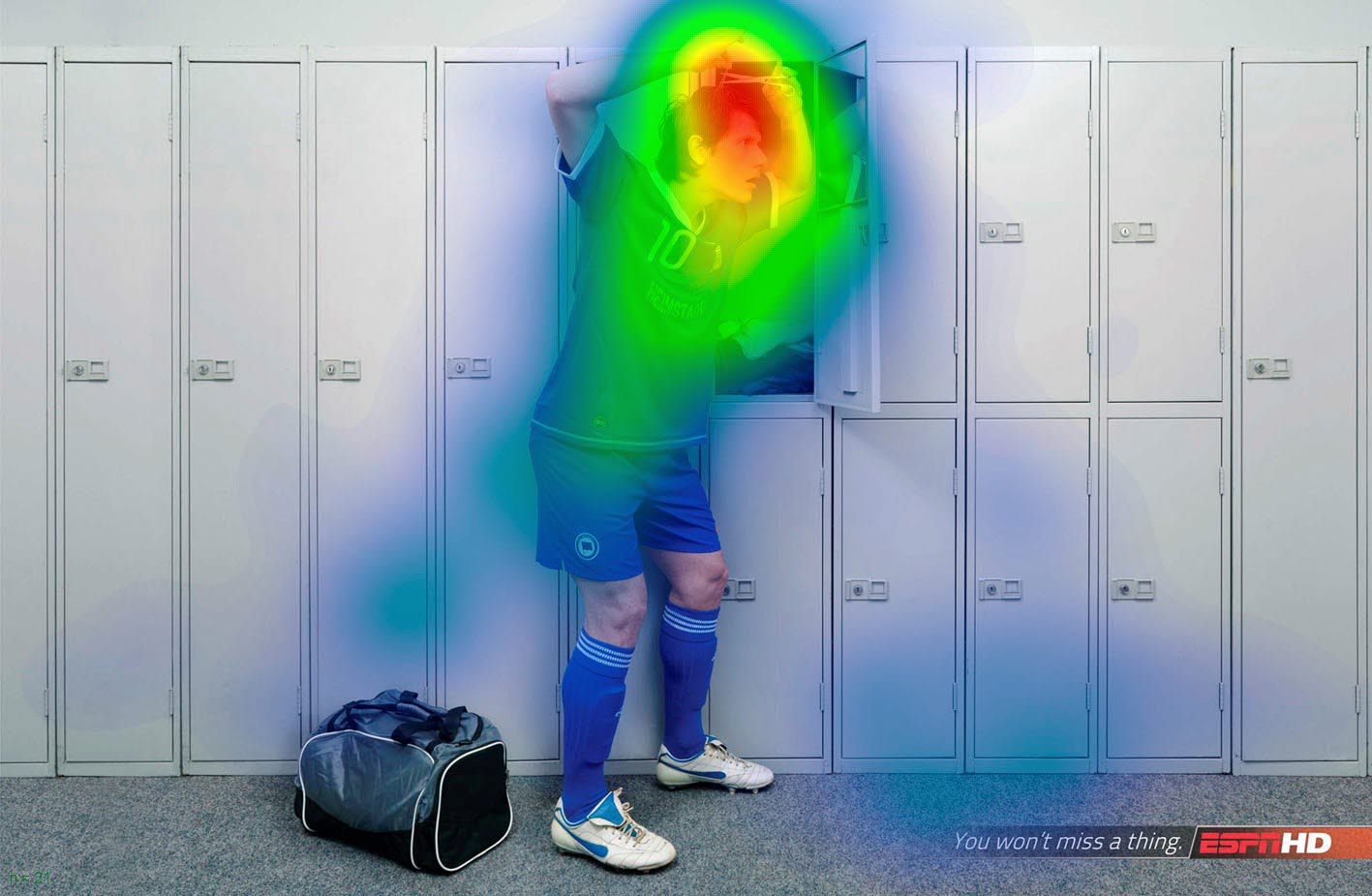 Ads have performed significantly better when they link the branding directly to the core engaging element of the image. Alternatively, a well-designed image can direct attention deliberately to the brand logo or message. In short, connect that logo to your most engaging element. If it is too far away, it won’t be seen, especially if the visuals are particularly engaging.

Predicting the emotional impact of your ad

Your ad has been seen and branding is noticed – you have engagement! Now the goal is to increase the impact of that engagement. How can you make it stick with that consumer and have it become part of his or her communication with others? Leveraging emotion is key here to drive effective advertising and communication. A central role of emotion is to emphasize what in the environment is important to us. Therefore, emotion influences where we decide to direct our attention and the degree to which we engage. And an emotional experience sticks. Consumers are more likely to recall what they react emotionally to and are more likely to share this experience with others. Video ads that elicit strong emotions— positive or negative— are far more likely to be shared than videos that have a weak emotional response.

Using facial coding technology included with the Sticky platform, it is possible to measure people’s emotions through facial expressions. So, while watching a video ad it is possible to determine in real time how people are feeling and where they are looking. Combining emotions with eye tracking data can predict if your video is skippable, has brand value or is otherwise engaging. By looking at the emotional signature of the video, you can tell if the ad is good or bad and predict how it will perform once released. Analyzing consumer’s emotions further optimizes ad performance.

Read more here on the insights that eye tracking can bring for advertising research and how you can get started.

Would you like to learn more about our products?

Would you like our research consultancy to conduct an eye tracking study for you?

Already a customer and need assistance?